Creating an Invoice from an iCal Block

iCal importing / exporting is often used to sync availability to various channels. Many times the block is then deleted and replaced with an actual reservation. The process of deleting a block and replacing with a reservation just got a whole lot more simple. 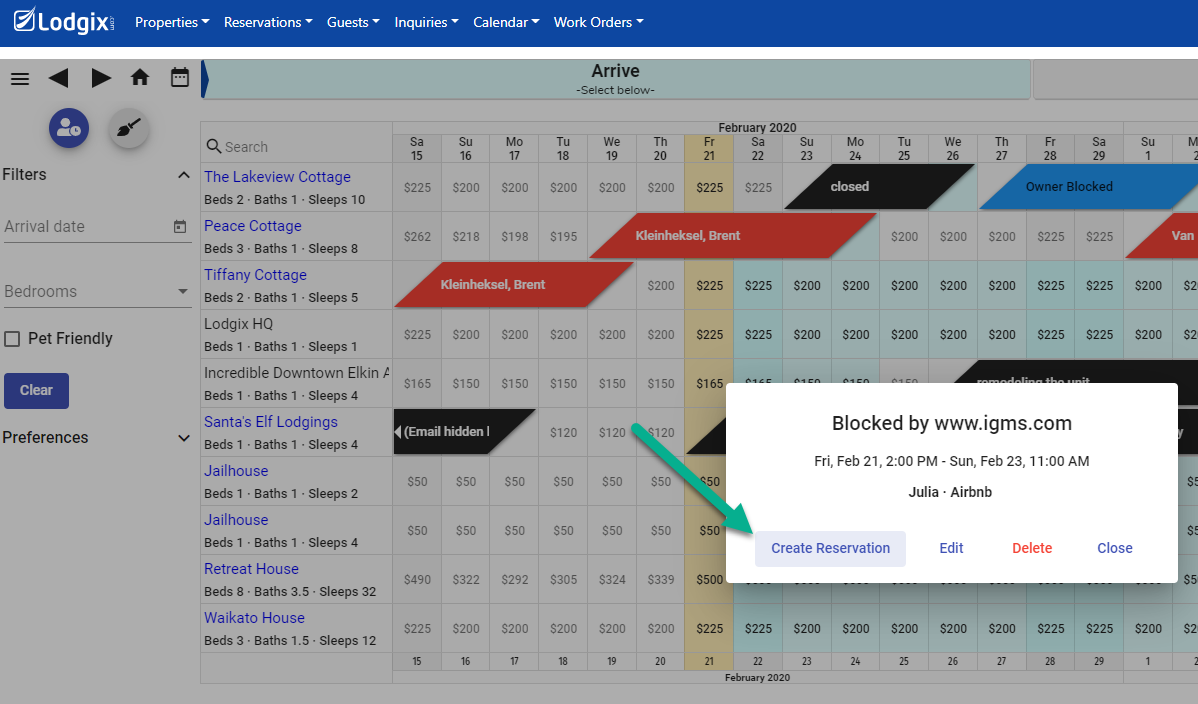 a small window will confirm your selection:

Remember this feature is only available for blocks created via iCal. It will not work for blocks that have been created by subscribers, employees, or owners. Once you have clicked the Create Reservation button, the block is immediately replaced by a reservation. You can update or modify this new reservation just like any other.

A note about the guest email address

Most iCal feeds will not include the guest email address. As a result,  Lodgix needs to generate a system email to create the reservation, it will look something like this:

No trigger emails will be sent to Lodgix system email addresses. It's just a placeholder address.

If any additional information is present in the ical feed, it will be captured and stored in the Invoice Comments area of the guest control panel.

Using Merge Guests to Assign an Existing Guest to an Invoice

This step will most likely only be utilized by new Lodgix subscribers who have imported an existing guest contact list into Lodgix from their previous software platform (an excel csv of the guest list can be emailed to us for importing).

To move reservations from an existing platform to Lodgix, many will import iCal and have blocks created on Lodgix. The next step would be to manually create invoices from those blocks using the process detailed above.

However, as noted above, ical does not include guest email addresses and so Lodgix create a system email for the new reservation.  Which begs the question....

How do I update a Lodgix system email with an actual guest email?

Go to the calendar tape and click on a newly created guest invoice.  The color of the new invoice will be red and it might look a little wonky:

When the guest control panel opens up for that invoice, click on the tab next to the invoice tab ((usually it will contain at least the guest first name) then click on the "merge guests" icon with two arrows (#2 below):

that will open this window:

The Target Guest Email will be your guest name, just start typing it and a list of all possible matches will be displayed. Select the correct guest name and click the "Merge" button. That's it! Now the ical blok created invoice will be associated with an existing guest.