Creating an Invoice from an iCal Block

iCal importing / exporting is often used to sync availability to various channels. Many times the block is then deleted and replaced with an actual reservation. The process of deleting a block and replacing with a reservation just got a whole lot more simple.

Remember this feature is only available for blocks created via iCal. It will not work for blocks that have been created by subscribers, employees, or owners. Once you have clicked the Create Reservation button, the block is immediately replaced by a reservation. You can update or modify this new reservation just like any other.

A note about the guest email address

Most iCal feeds will not include the guest email address, and thus it cannot be used when creating a reservation. In these circumstances, Lodgix will generate a system email that looks like this:

No trigger emails will be sent to Lodgix system email addresses. It's just a placeholder address.

If any additional information is passed through the feed (comments, etc.) it will be captured and stored in the Invoice Comments area of the guest control panel.

Using Merge Guests to Assign an Existing Guest to an Invoice

This step will most likely only be utilized by new Lodgix subscribers who have imported an existing guest contact list into Lodgix from their previous software platform (an excel csv of the guest list can be emailed to us for importing).

To move reservations from an existing platform to Lodgix, many will import iCal and have blocks created on Lodgix. The Logical next step would be to manually create invoices from those blocks using the process detailed above.

However since the process of converting an ical feed to an invoice does not query the existing guest database, the invoices will all be created with Lodgix system email addresses. Which begs the question:

How do I assign a block created invoice to an existing guest?

The answer is not ideal, but it works.

Go to the calendar tape and click on a new created guest invoice, you'll know it was created from a block as it will say "Booked:", rather than the guest name, and it will be in red. 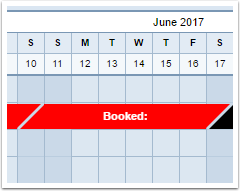 When the guest control panel opens up for that invoice, click on the "Booked:" tab and then select and copy the Lodgix system email address.

Also make sure to know the guest name that should be on the invoice.

and click on the HERE button where it says "To merge two guests with different email addresses, click HERE"

Copy the Lodgix system email into the source field and select the resulting record from the dropdown: 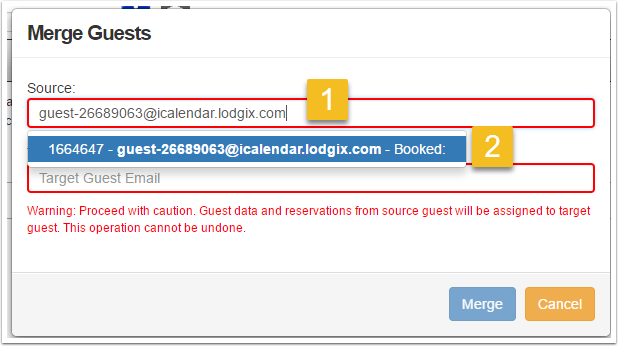 The Target Guest Email will be your guest name, just start typing it and a list of all possible matches will be displayed. Select the correct guest name and click the "Merge" button. That's it! Now the ical blok created invoice will be associated with an existing guest.

Note: The Merge button will not work if you don't select the source and target guest records from the dropdown.